We worked with the Economic Community of West African States (ECOWAS)—comprised of 15 member countries—to strengthen their response to early warning of emerging conflicts, as part of the USAID REWARD program. 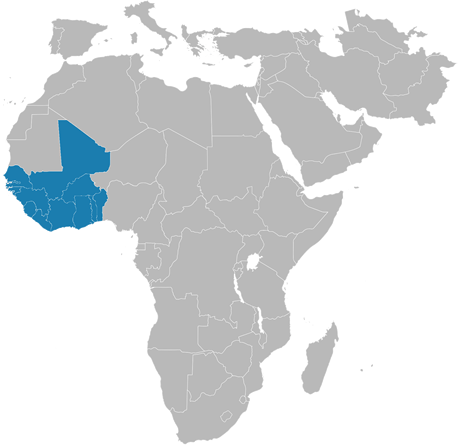 In the winter of 2015-2016, Karuna Center began work on a 4½ year program to support the Commission of Peace and Security of the Economic Community of West African States (ECOWAS), a 15-nation trading bloc that has emerged as a powerful force for peace. In fall 2015, ECOWAS was widely praised for its use of diplomacy to help reverse a coup in Burkina Faso, allowing democratic elections to take place. ECOWAS includes some areas where Karuna Center has deep peacebuilding experience—such as Senegal, Liberia, and Ivory Coast—as well as places where the Boko Haram insurgency and other conflicts are ongoing.

Our work was a part of a larger USAID-funded project in collaboration with lead implementer Creative Associates International and the project, abbreviated as REWARD,* supported the West African leaders in ECOWAS to respond quicker and more effectively to emerging violent conflicts. While Karuna Center focused primarily on strategies for effective non-military responses that can prevent the escalation of conflict, another partner in the project, Fund for Peace, offered their renowned expertise on mechanisms for early warning.

In early 2019, we facilitated a training exercise in which 12 departments across ECOWAS developed coordinated, multi-leveled responses to a hypothetical crisis in an imaginary nation. Then, in January 2020, we supported ECOWAS staff to practice designing a response to a real situation—the complex humanitarian crisis in the Lake Chad basin, impacted by climate change, irrigation practices, and violent extremism.

As the COVID-19 pandemic continued to unfold throughout 2020, Karuna Center worked as part of REWARD to develop and lead a series of webinars and virtual trainings on the use of practical tools and procedures to coordinate responses to emerging conflicts. These tools were developed to support the ECOWAS Conflict Prevention Framework—which emphasizes “human security” in all its dimensions rather than just preventing violent conflict alone. This is especially important when a threat like COVID-19 emerges that may increase vulnerability to conflict. To protect human security in this context requires strategic work across economic, political, security, health, and other sectors of governance.

*REWARD is an acronym for Reacting to Early Warning and Response Data.

“We cannot talk about conflict prevention without recognizing the role of early warning and response. They are intertwined.”

This film documents the Country Risk and Vulnerability Assessments (CRVA) conducted across West Africa to measure communities’ resilience to conflict, humanitarian emergencies and other shocks. These CRVAs take a hyper local approach to data collection and assessment, which in turn better informs the Economic Community of West African States’ (ECOWAS) violence prevention and development initiatives.

Building on this foundation, REWARD then worked with ECOWAS and national actors for robust analysis and response planning across the region.

USAID’s REWARD project supports ECOWAS in its use of innovative technology and application of best practices to detect and better respond to human security challenges across the region.

The USAID REWARD project was implemented by Creative Associates International and their sub-contractors, the Fund for Peace (FFP) and Karuna Center for Peacebuilding.

For information on the CRVAs and the film, please contact Alimou Diallo at alimoud@crea-reward.com or Aliya Jalloh at AliyaJ@creativedc.com.